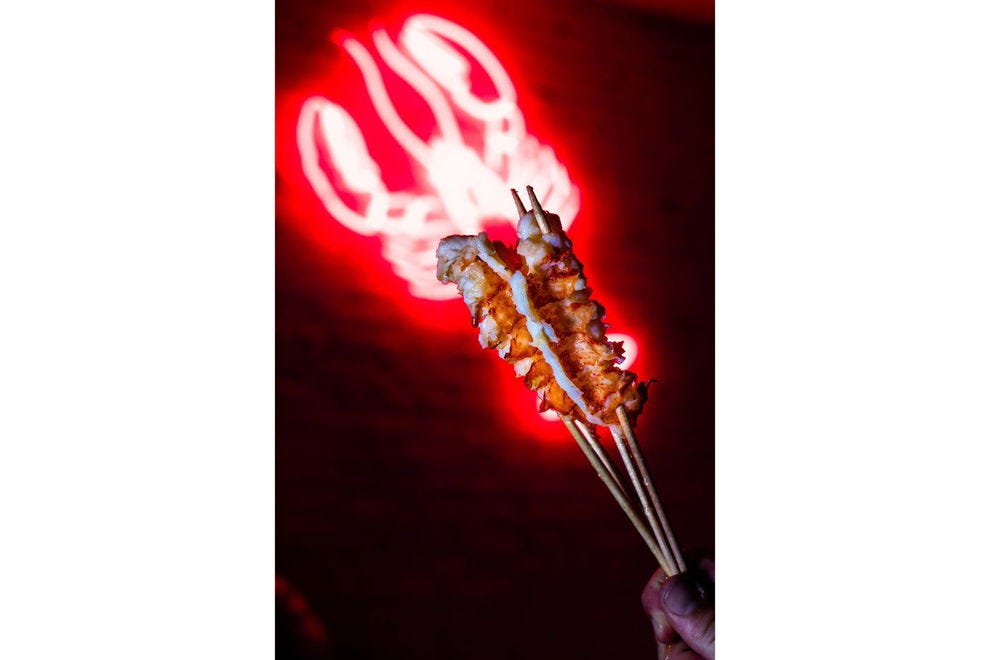 When you think about Maine, a number of things likely come to mind: blueberries, moose, seascapes, charming towns, lush parks. But nothing is more associated with the Pine Tree State than lobster.

The red crustacean has become a symbol for luxurious meals everywhere. In Maine, it’s frequently served whole with drawn butter and lemon or in an overflowing lobster roll. While those classic preparations are always delicious, Maine chefs have been getting creative with lobster, too.

At breakfast, look for lobster omelettes, lobster Benedict and lobster frittatas. Lunch and dinner offerings are next level, with lobster pizza, lobster burgers and lobster lollipops. Taking it a step further, it’s also possible to enjoy a lobster dessert, lobster paella and a lobster cocktail. Use this list to discover the most creative ways to eat lobster in Maine.

It may sound weird – and perhaps even unappealing – to combine seafood with dessert, but one Bar Harbor shop has made it work. Ben & Bill’s Chocolate Emporium mixes a pound and a half of lobster claw and knuckle meat into two gallon batches of its buttery, vanilla ice cream.

Let the ice cream melt in your mouth for a few seconds to get the flavor of the lobster to come out. It’s available in cones or cups (along with a host of more standard flavors). 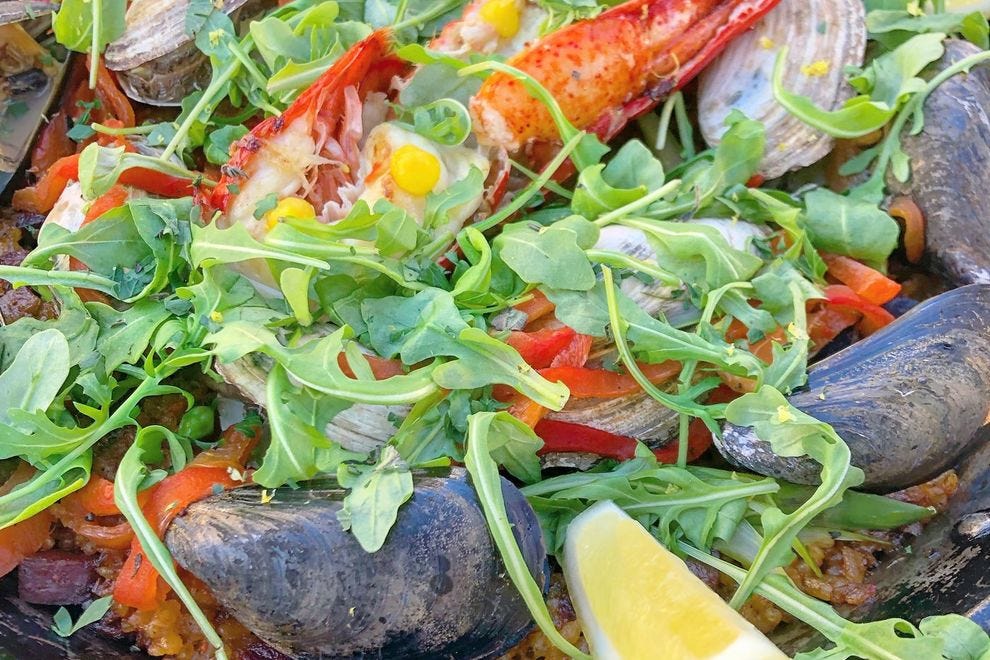 At an Ogunquit tapas restaurant, lobster gets a Spanish spin. Order the Maine seafood paella – which is perfect for sharing – to enjoy a traditional Spanish paella that’s topped with lobster, mussels, steamers, bacon, chorizo, piquillo peppers and seasonal vegetables.

The Calasparra rice on the bottom is perfectly crisped and slightly chewy, making this charming seaside village feel a little bit like Valencia – if Valencia had Maine lobster. La Orilla is a completely al fresco restaurant, so make sure to go on a dry day. 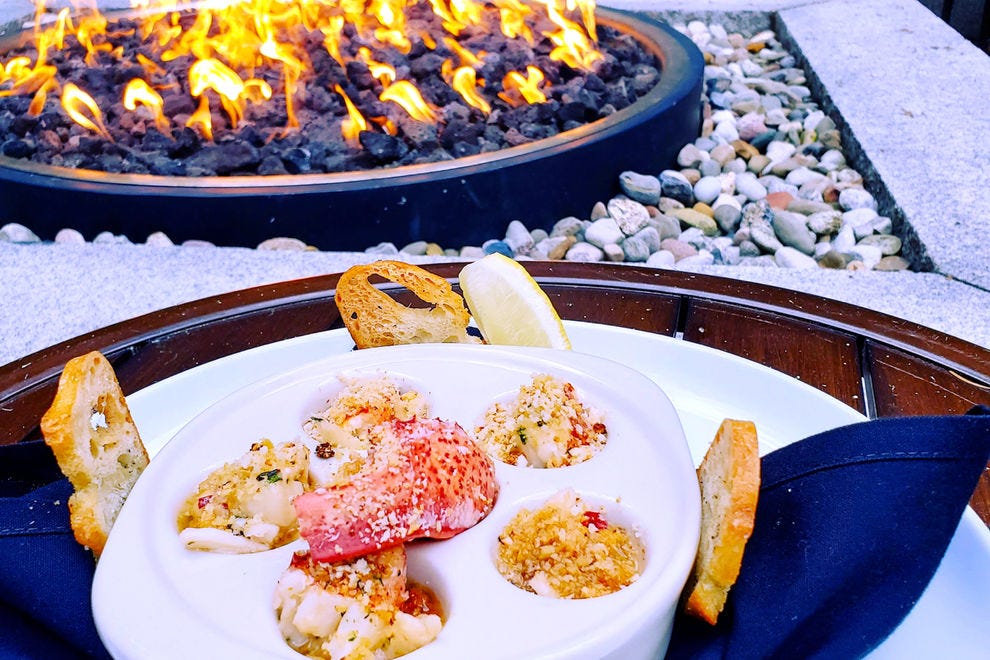 For a French take on Maine’s signature seafood, Portland’s BlueFin North Atlantic Seafood replaced the snails in escargot with lobster. The chef combines local lobster claw and tail meat with a rich mixture of butter, herbs, shallots, garlic and breadcrumbs. The mixture gets baked in a classic escargot ramekin and comes with crostini, lemon wedges, plus a claw meat garnish.

In the summertime, the restaurant’s outdoor courtyard – complete with fire pits – is a perfect place to try this unique dish. 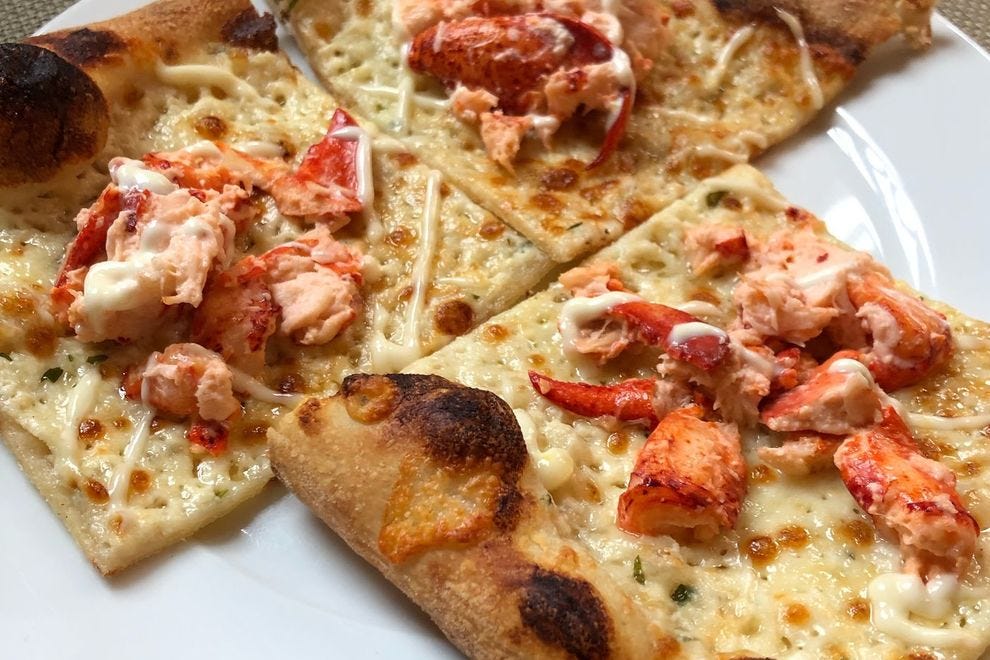 Right in the heart of town, Ogunquit’s Cornerstone is known for its creative pizzas. Around St. Patrick’s Day, the kitchen cooks up a Reuben pizza and the holiday season’s Christmas Cheer Pie marries cherry peppers, red onions and scallions to represent Yuletide colors.

In the summertime – when both the lobsters and crowds are plentiful in Maine – this busy pizzeria serves lobster pizza. Each slice of the rectangular, thin crust pie is covered in tender lobster meat, a tarragon-sherry ricotta and mozzarella mixture, scallions and is dressed in lemon aioli to offer a nice contrast to the rich flavors. At around $40 for this 10×14 pie, it’s not cheap, but how often do you get to say you ate lobster pizza? 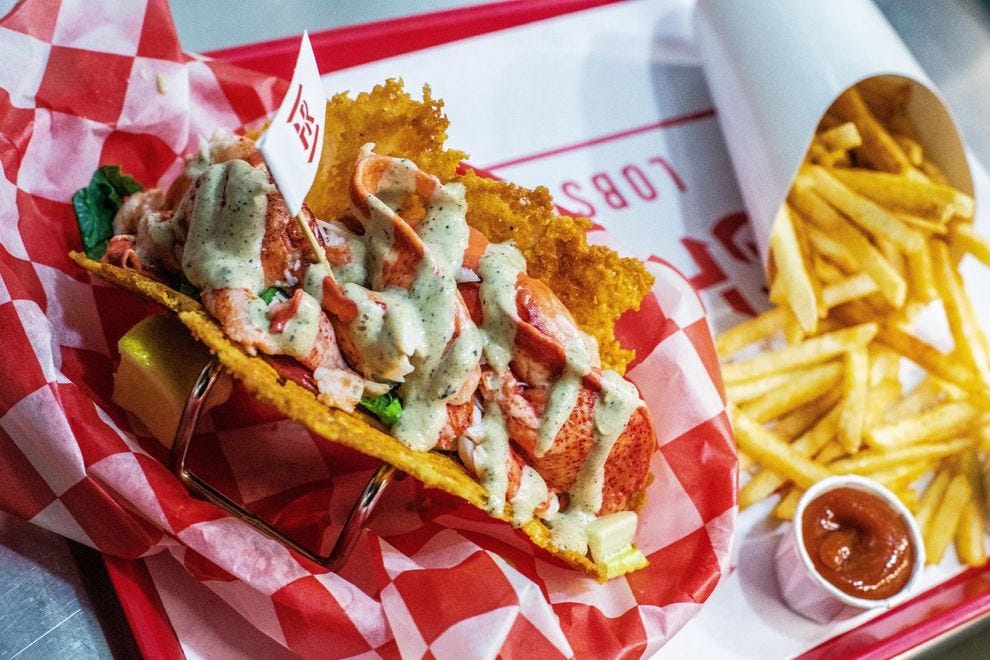 Portland’s Highroller Lobster Co. is known for its creative uses of Maine’s favorite ingredient. The one-time food cart that grew into a full restaurant and bar sells a riff on a lollipop called a Lobby Pop. It’s a fresh lobster tail, coated in butter and served on a stick. You can also get it fried in cornbread batter.

Lobster tacos are readily found in Maine restaurants, but Highroller’s are a bit different. The owners noticed that the overflow cheese from their lobster grilled cheeses (another decadent treat) crisped up nicely on the grill, so they created a taco shell made completely out of cheese. The carb-free cheese shell gets stuffed with lobster, lettuce and a choice of sauce – like lobster ghee or lime mayo. 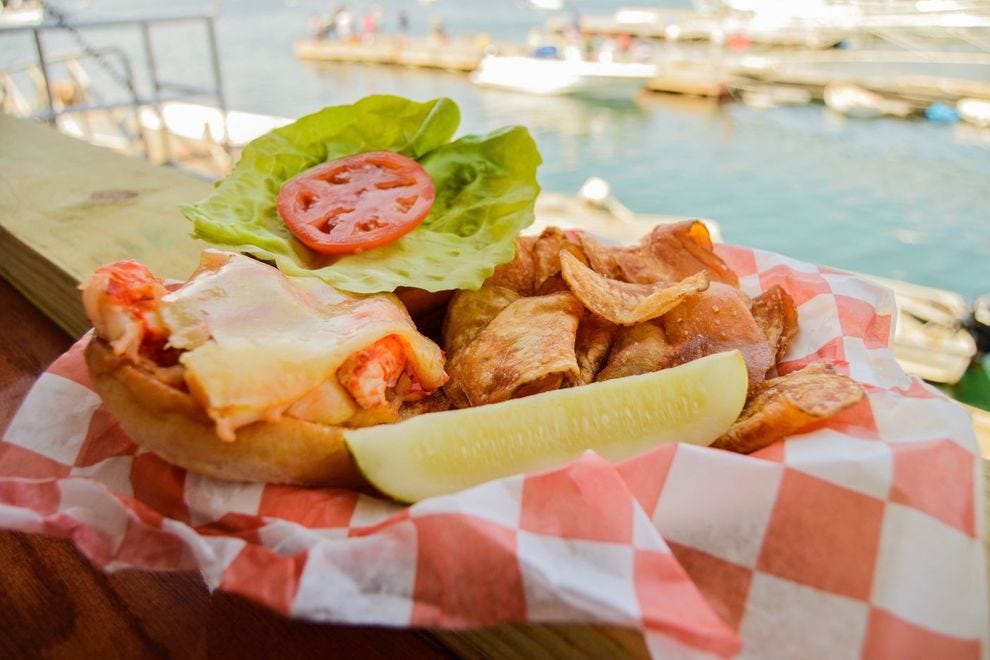 After being in the lobster serving business for nearly nine decades, Beal’s Lobster Pier decided to have some fun. That’s how the lobster burger was born. Along with a quarter pound of fresh lobster meat (warm from being cooked in garlic butter), this sandwich is topped with lemon mayo, melted gruyere, a bibb lettuce leaf and a slice of vine-ripened tomato. It comes on a toasted, buttered brioche bun with potato chips and a crunchy pickle on the side. 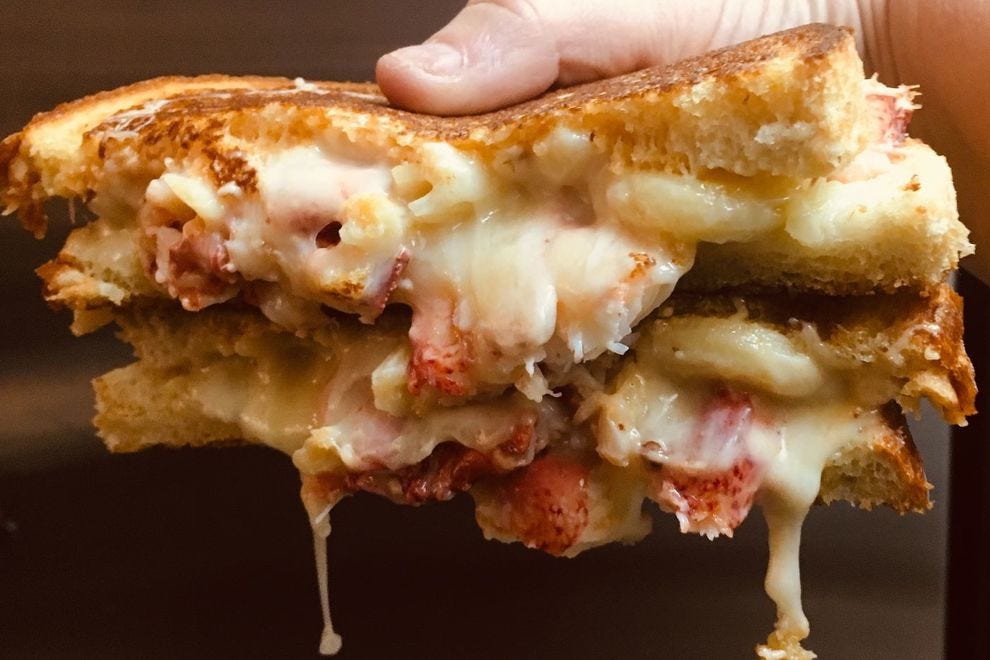 Bite Into Maine operates a couple of food trucks that are known for their lobster rolls with creative mayo flavors (wasabi, curry and chipotle). More recently, the company opened a 12-seat takeout operation at its commissary kitchen in Scarborough. 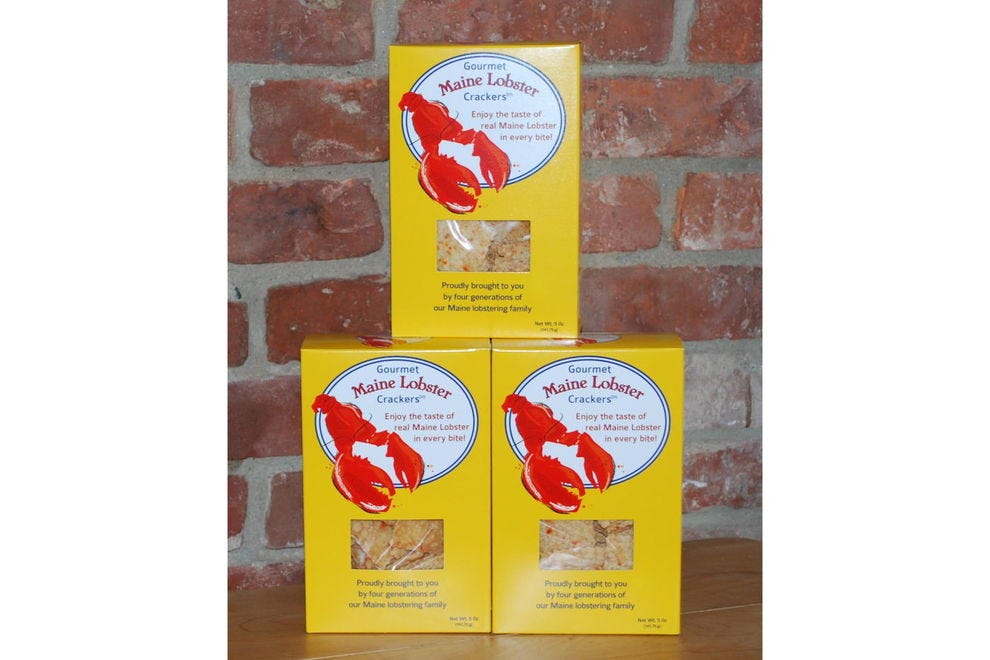 A lobsterman and his wife put their heads together to create Gourmet Maine Lobster Crackers. These snacks aren’t simply flavored to taste like lobster – they are baked with freshly caught lobster, local butter and Maine sea salt. Pair them with chowder, a mild herbed cheese or goat cheese.

This treat is a perfect way to get a taste of Maine anywhere with no cooking necessary. Find them at the Rockland Maine Farmers Market, Delano Seafood in Waldoboro and Wallace’s Market in Friendship. 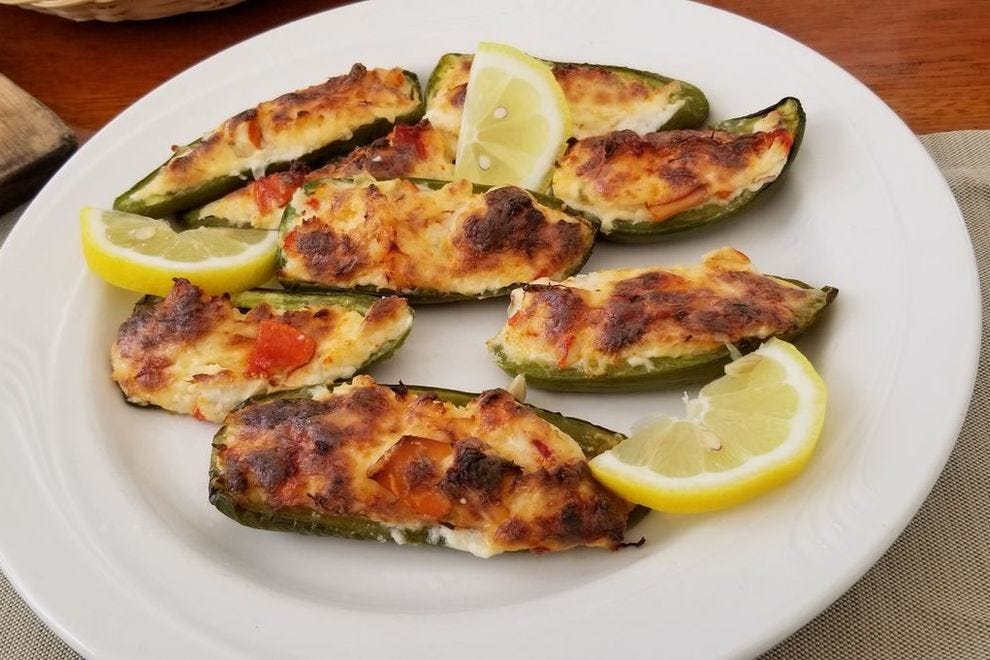 There was a time when Cook’s Lobster and Ale House served a lobster martini, but it tasted a little too much like drinking sea water, so the bar changed things up and created a Lobster Bloody Mary. It’s almost like a cocktail and appetizer in one.

Q&A: Deadly opioid crisis sparks lawsuits across the US

10 unique ways king cake is being served in New Orleans

What is Long Island iced tea, and who makes it best?

10 unique ways king cake is being served in New Orleans